This Friday marked the long awaited return of Coheed and Cambria, a progressive rock band from New York, well known for their concept albums, based on a science fiction storyline called The Amory Wars. The series is written by the band’s singer, Claudio Sanchez, and has been transcribed into a series of comic books as well as a full-length novel.

It has been three years since they released their last album, The Color Before the Sun, their only non conceptual album that does not take place in the Amory Wars universe. This choice divided their fans, as many loved the new material while others disapproved of the change as well as the more pop rock musical approach rather than their much darker prog rock-metal sound of their previous albums.

So when on May 31st Coheed released «The Dark Sentencer», the first single of the new album, many fans welcomed the return to The Amory Wars storyline as well as the return to the more dark and heavy sound.

Coheed may have gone back to the basics, but seem to have been rejuvenated. It seems as this break from their sci-fi saga was something they needed. As for the story, The Unheavenly Creatures picks up in the aftermath of No World for Tomorrow, an album that was released back in 2007 and that finished the original Amory Wars storyline. And keep in mind that there are more to come, since this is only the first of a new five-album cycle called Vaxis!

But even if you don’t really follow the storyline (after all the albums are not exactly a narration, but more of a soundtrack to accompany the story, as Sanchez has stated in the past) you can easily get hooked to the music alone. Coheed and Cambria have a very unique music style: Big riffs, many changes and surprises plus a tendency to create a specific mood. After all, the album was written in a way that creates a mood and every song makes even more sense within this framework.

Speaking of creating a mood, as all other Coheed records, The Unheavenly Creatures begins with just a simple piano tune, followed by the almost creepy voice of the narrator that talks about «The Five Houses of the Star Supremacy» that have «privatized the detention zones of the galaxy», easing the way for the (almost typically) epic «The Dark Sentencer» that follows for the next 7:45 minutes! Well played, Coheed. Well played… 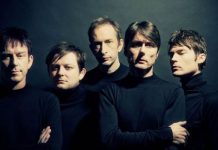